Wat Pho is the oldest temple in Bangkok, even older than Bangkok itself as it was built around 200 years before Bangkok (Thailand) became the city. Wat Pho’s official name is Wat Phra Chetuphon. Wat Pho is located in the Rattanakosin District of Bangkok, adjacent to the Grand Palace.. 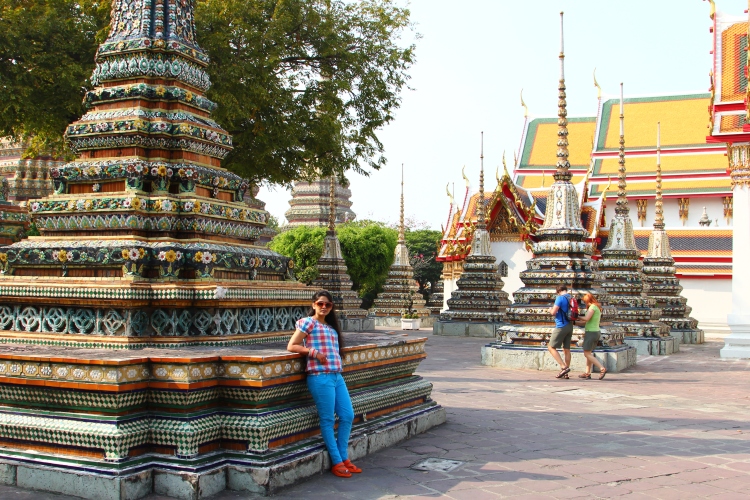 We reached Wat Pho bright and early but still found numerous touts around who kept on telling us that it is closed till 1pm and tried to put us in a tuk-tuk to see some other temples. We just turned a deaf ear to all of them and reached the temple to find it was open and allowing visitors. We bought the tickets and started exploring the beautiful temple of the Reclining Buddha. At the entrance to the temple we were given a bag in which we had to put in our shoes and carry it all around with us. The moment we entered the temple – the first thing we noticed were the beautiful carvings on the walls and doors, followed by the colorful paintings / murals on the walls. But after all this we saw the famous idol and forget everything else.

There is a tradition in which if you are wearing shimmer/ translucnt/short clothes you had to cover up in one of long gown(you might have seen Buddhist wearing it all the time) It can be in coral/maroon or green.So just a care tip keep the clothes simple. 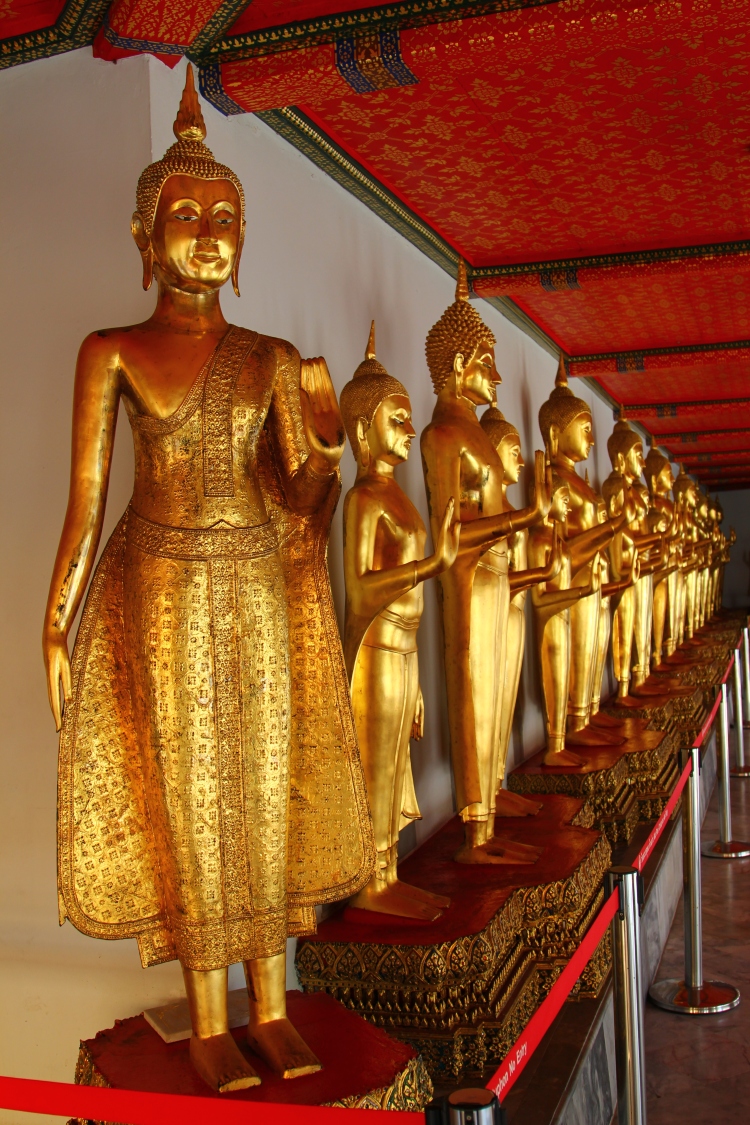 The Temple of the Reclining Buddha — considered one of the most important temples in the city, famous for its giant reclining Buddha that measures 50 meters long and is covered in gold leaf. At 50 metres long and 15 meters high, this golden vision is quite a sight.  The feet of the Buddha are decorated with 108 Lakshanas or signs which are the mark of the true Buddha and the position of the Reclining Buddha represents the passing of Buddha into Nirvana. Almost 50 feet high, over 150 feet long and covered entirely in gold leaf except for the base of its feet which is mother-of-pearl has intricate toe-prints and ‘laksanas’ illustrations. 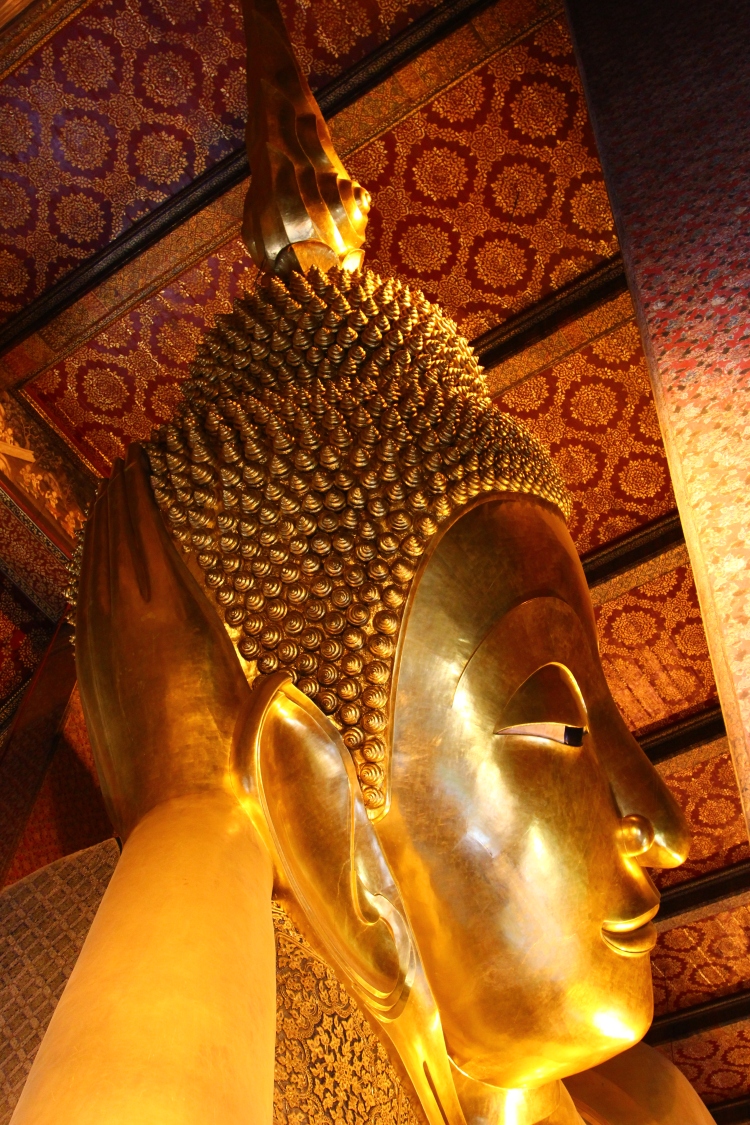 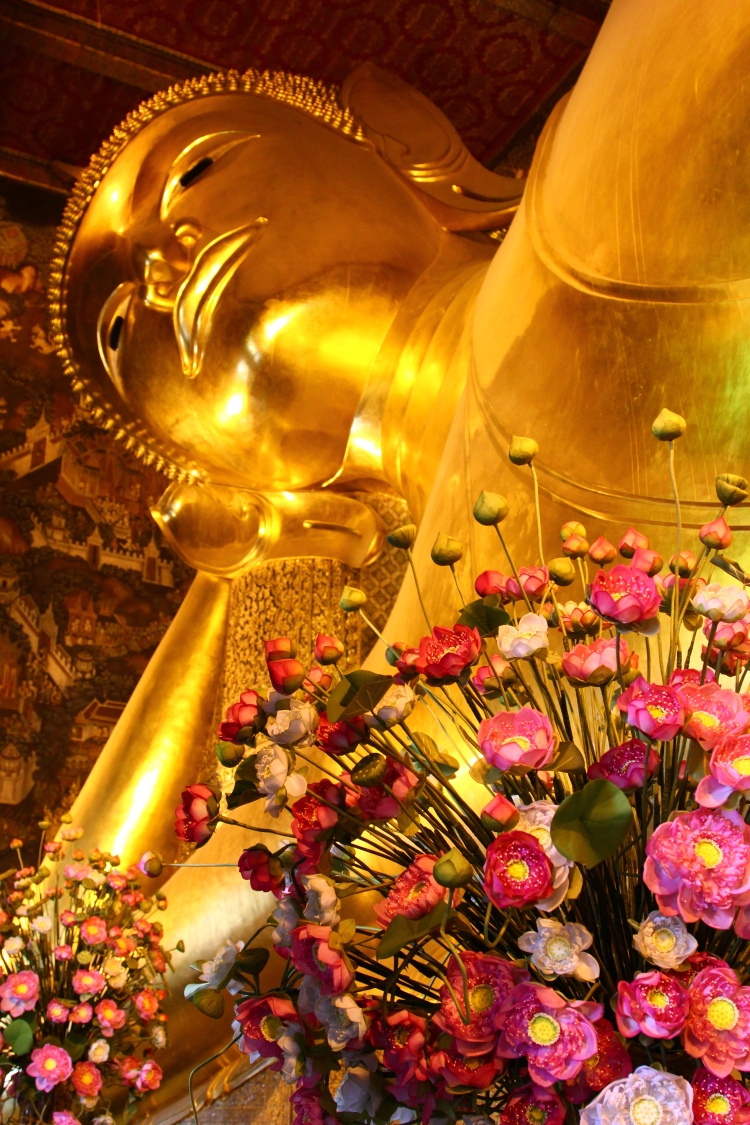 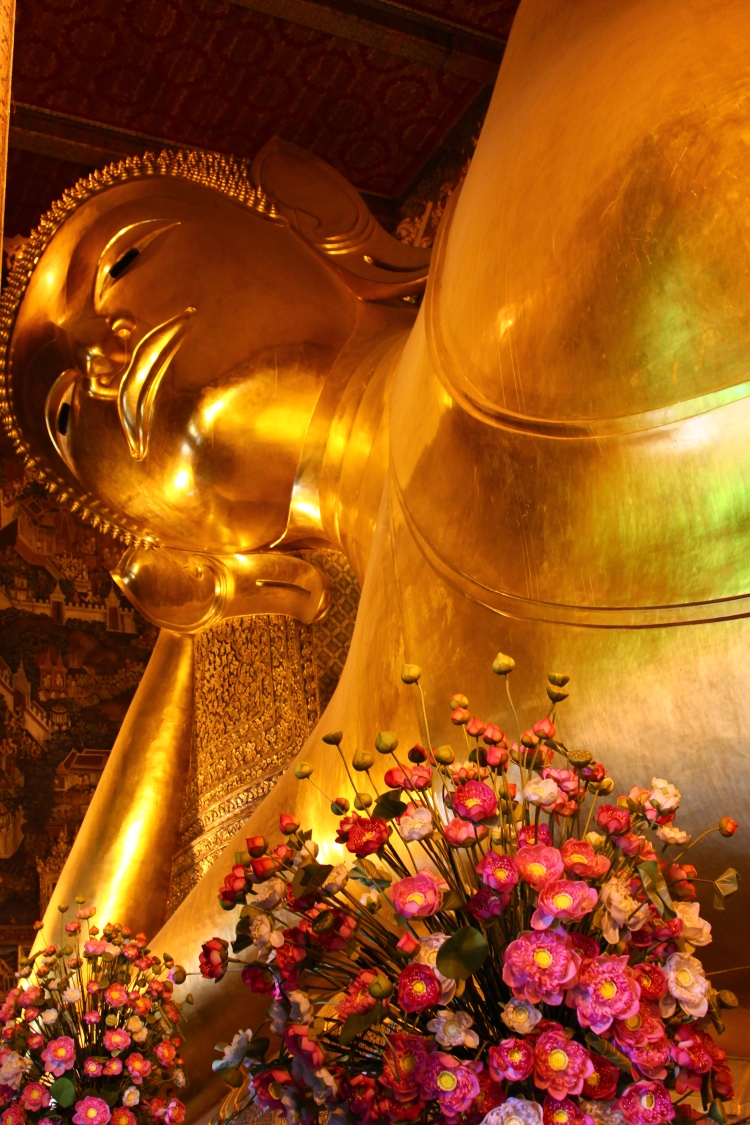 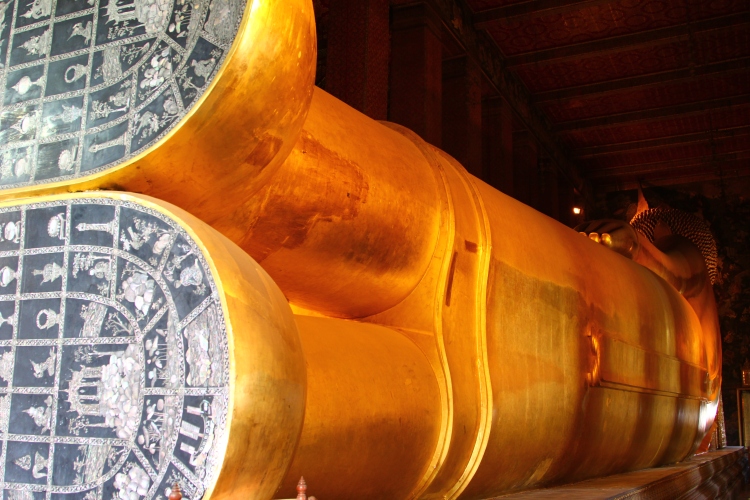 It is such an incredible place, all gold, purity and peace resides here I really have never seen anything like it, every details so intricate and thoughtfully placed. This follows a tradition to Purchase a bowl of coins to drop in the 108 bronze bowls which line the length of the walls (108 is a significant number for the Buddha).108 bowls line the room, it is said that if you put a coin in each bowl as you walk around it will bring you good luck and long life making a wish for each pot. 108 symbolises the 108 positive actions which lead to Buddha perfection.Still in awe at the size of this thing and donating 20baht for the coins necessary to complete the wishing pot coin dropping strip (which I made it to the end with the exact amount of coins needed – a lot of people seemed to fall short or have too many. I think that makes me pretty special.

It is difficult to really get a good look and appreciate the statue as the room it is housed in is quite snug and with all the people cramming in, you have to keep moving around the room in an anti clockwise direction.So better to wait a little and invest some time to go through the details. 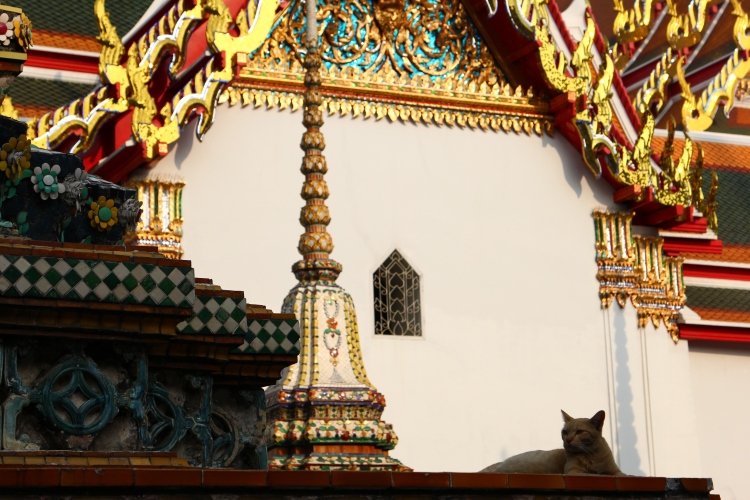 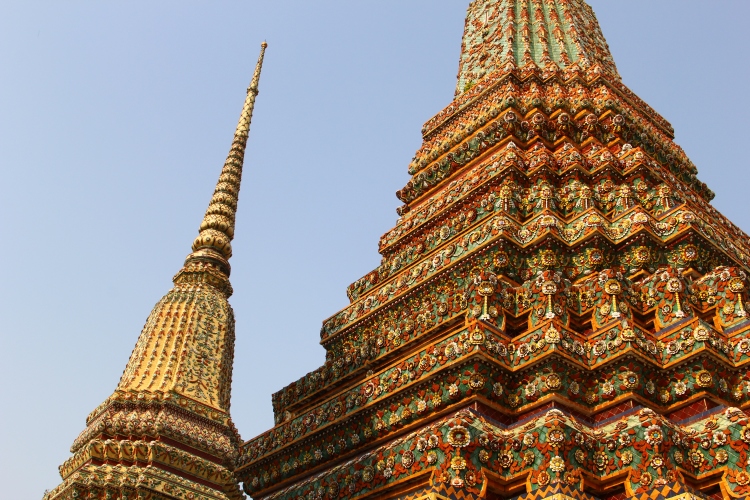 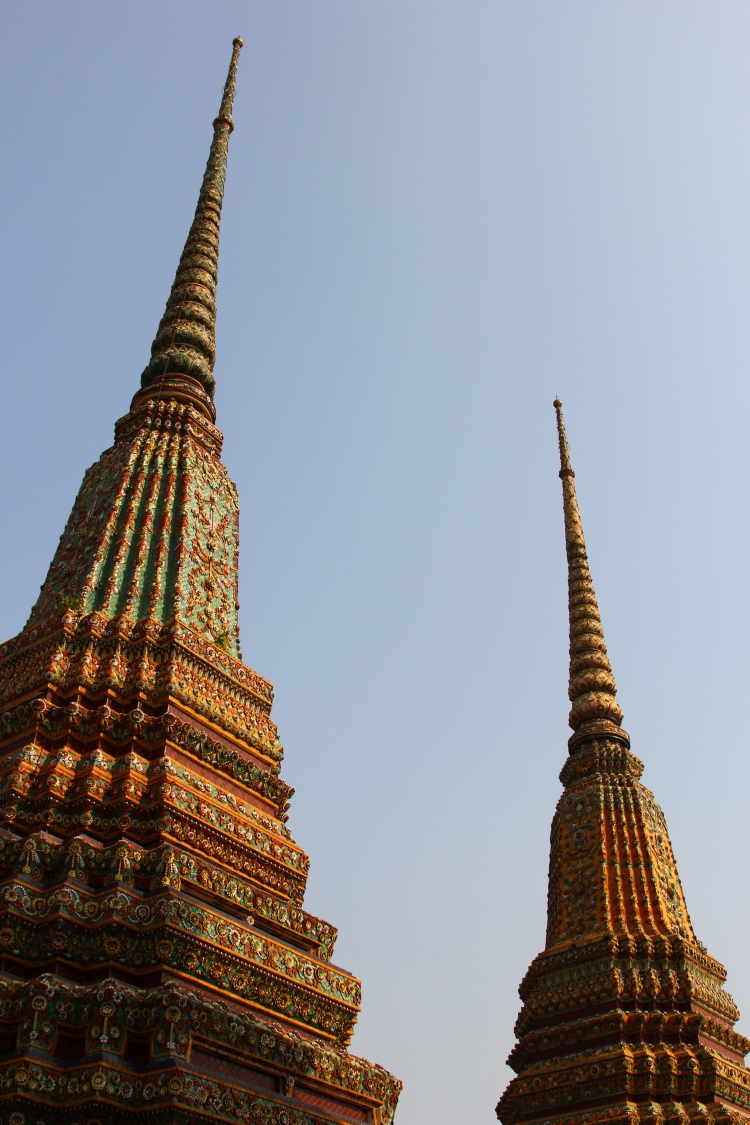 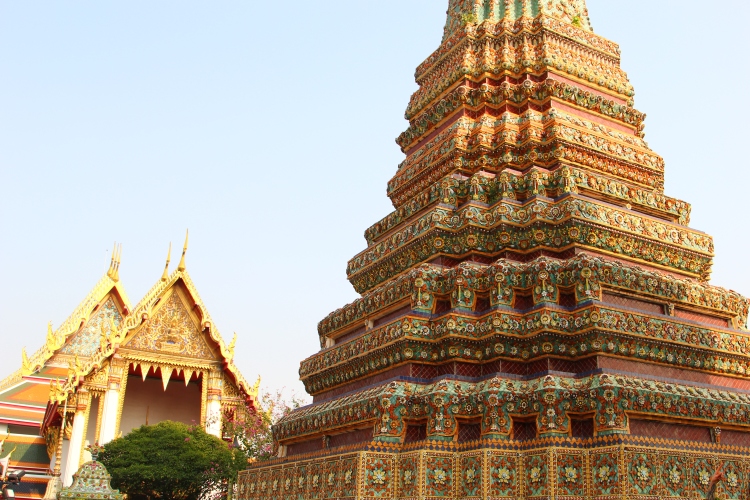 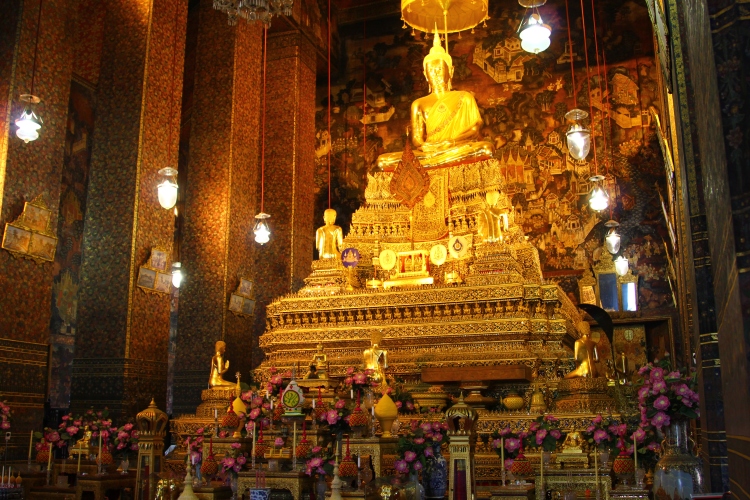 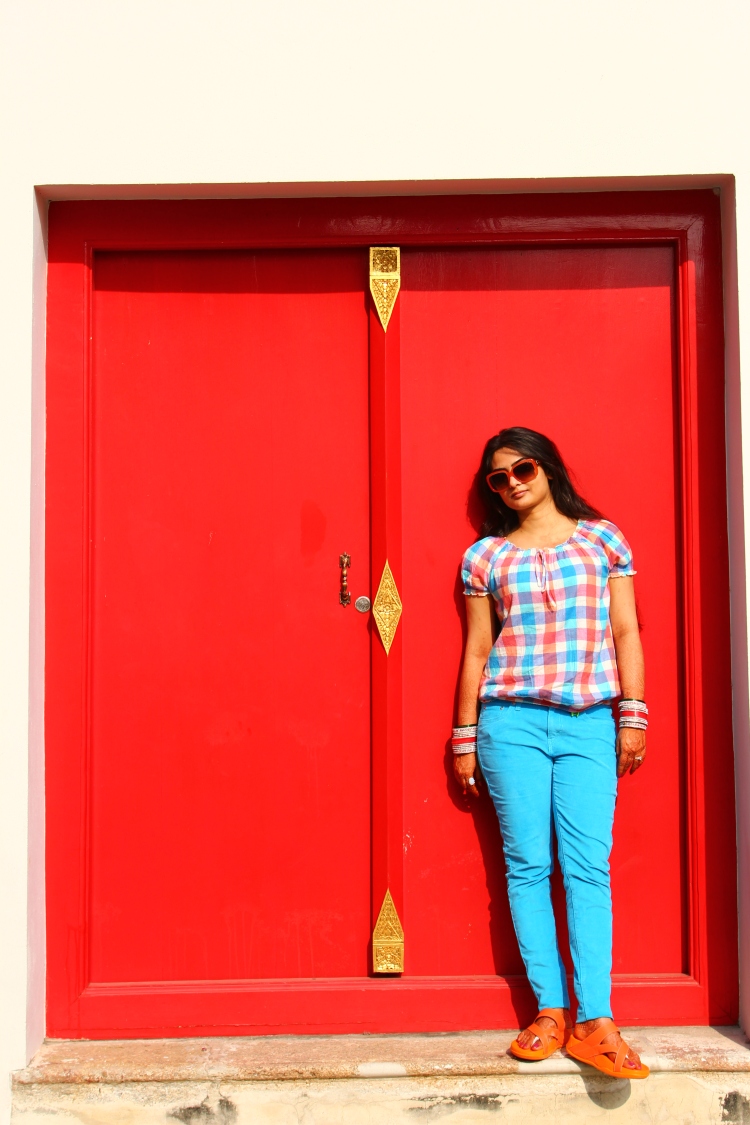 Thereafter we head outside to discover as Wat Pho isn’t just about the reclining Buddha. Outside was the home to beautiful buildings, monuments and statues. We walked around for a couple of hours, constantly discovering new areas in places we thought we’d already explored. Each corner of the surrounding is so worth taking pictures therefore  camera is a must. At times the crowds surrounding the Reclining Buddha linger there, leaving the rest of the temple grounds relatively calm and peaceful. The most surreal part – seeing the quiet, spiritual and often reserved Monks getting super smiley and school-boy excited over taking selfies on their phones with the Buddha in the background.

Don’t just pop in to see the Reclining Buddha, though; spend some time exploring the rest of the massive temple complex, too. You’ll find a huge collection of gilded buddhas, detailed stupas, and some beautiful spaces to just stroll and relax.

Wat Pho is also known for being Thailand’s first university, it is the birthplace of traditional Thai massage and there is a Thai Massage school in the grounds.Thai massages are available at the temple, just join the queue and wait for a masseur to become available.  You can also enrolling in one of the massage classes.

Wat Pho – Temple of the reclining Buddha: Opening Hours: Daily 08:00 – 5pm, massages until 6pm.
Location: Maharat Road. Close to the river (about a half mile south of the Grand Palace), Old City (Rattanakosin)
Ticket Price : The entrance fee is 100 baht includes a free bottle of water.

Its a must visit peeps.. I hope you enjoy the gorgeous set of pictures. Love ❤